Home
BLOG
What Are The Benefits Of Cycling

What are the benefits of cycling? It depends on how you carry it out. If you use it for a leisure ride, cycling would do little apart from giving happiness. However, if you follow the routine with rigorous enthusiasm, cycling would rid you of the worries which would, otherwise, require medication and treatments. Moreover, in stark contrast to the medical treatments – which require you to spend a fortune, you could gain all the benefits of cycling without spending a dime. Thus, it is safe to say that cycling is the most cost effective method of getting you fit and healthy. 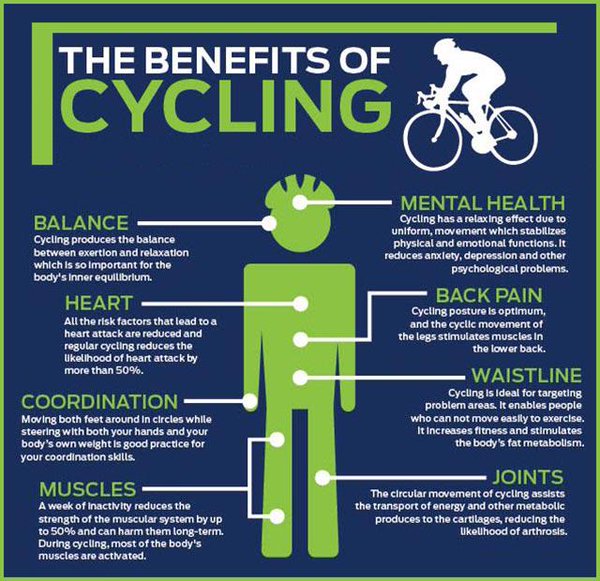 Below mentioned are the benefits of cycling:

Do you know that heart diseases are responsible for 30% of the deaths annually? If you want to make yourself safe, only 20-minutes of cycling could do just that. When you start to exert force, your heart would pump a greater amount of blood in your veins. Consequently, the blood clots and cholesterol – two major reasons for the heart attack, would be diminished.

Moreover, since it is a low impact exercise, cycling won’t come hard on your joints and muscles – unlike that of hard gym exercises. Thus, with the least amount of exertion, you’d be able to garner the best of results.

Most scientists agree that a week of inaction could reduce the strength of muscles by almost 50%. Being an excellent alternative to the gym, cycling is a brilliant workout for muscles. By putting to work the likes of quadriceps muscles, hamstrings, hip flexors, calf muscles, and arm muscles, cycling makes sure that the major portion of your body’s muscles is in action. Consequently, in addition to strengthening them, cycling makes sure that they remain healthy.

While certain gym exercises are brilliant for your joints, they do have a shortcoming: they are high impact exercises. Thus, if you fail to do those exercises in the right manner, you could risk aggravating joint problems – instead of annihilating them. Looking for an alternative? look no more.

However, before we dish out the advantages of cycling, there are some points which you need to observe. Make sure that the seat of the cycle is balanced adequately. Otherwise, it would increase exertion on your joints. Moreover, if you want to avoid the stiffness which often comes with cycling, warm up with a 5-minute walk.

As for the advantages, cycling helps in reducing arthritis symptoms. In addition to mobilizing the knee joints, it also aids in their strength. Moreover, thanks to the circular movement of your knees during cycling, energy will be transported to them via the brain. As a result, the likelihood of arthritis would be diminished as well.

Ever witnessed the effects of fertilizer on the soil? Cycling does the same with your brain. All those hours which you spent pedaling won’t only strengthen your glutes – but your brain would also get its fair share of attention.

For example, when you are on a ride, you force your nerve cells to fire. Consequently, after a complex brain phenomenon, new brain cells would be created. These brain cells, if you don’t cycle, might not be created. Hence, you literally build your brain during cycling.

However, if you think that you need to be younger to reap the abovementioned benefits, it is simply not the case. Apart from creating the organs, cycling restores them. This view is substantiated by a research which claims that cycling makes brain three years younger.

Thanks to the creation of new brain cells, your memory power, concentration levels, and thinking abilities would also improve. Hence, you could also develop greater problem-solving skills.

If you’re a person who has suffered back pain in the past – or fighting with it in the present, you could testify it could be painful. In addition to jolting your whole body, back pain also affects your ability to concentrate.

When you start to pedal, you are sending waves of blood to the damaged area. These waves will carry oxygen with them which would act as a natural healer. As a result, your back pain would start to diminish.

However, you need to be extra careful if you want your cycling efforts to reduce your back pain – instead of aggravating it. Provided you don’t have the right posture, your back pain would only worse. Thus, before picking up your bike, it is better to consult your physiotherapist.

One of the major reasons of a bulging out waistline is the accumulation of fats in your belly. As long as you don’t subject them to rigorous exercise, these pesky, little fellas won’t go away. As you might guess, cycling does just that. By subjecting your belly muscles to work extra hard, cycling breaks down the fats that have rented space in your belly. As a result, your waistline would automatically go back.