Thirteen years ago, John Deniz, on transitioning his career from Engineering to Finance, was told by his new colleagues that he should take up golf. However, for a person who has been listening to the same advice since his MBA days, Mr. Deniz wasn’t convinced.

In his own words, he had played golf “once or twice” only to get disillusioned with it thinking that “it isn’t a real sport”. Thankfully for Deniz, it was only a matter of time before his colleagues start to think like him.

For, while he was recommended to take up golf in the past, people started telling him that he should take up “golf or cycling”.

While you might see it as a lone case, the above mentioned suggestion – in which his colleagues asked Mr. Deniz to try cycling, is one which a lot of business executives has received in the recent past.

One of those business associates is Jean-Jacques Lorraine. Apart from running an award winning architecture practice named Morrow + Lorraine in London, he is a cycling enthusiast who has taken part in various bike rides, but not for the purpose you think.

According to Mr. Lorraine, he has used his bike rides to create a “bonding experience that endures”. For, in an interview which he gave to The Economist, Mr. Lorraine estimated that at the time of Interview – of all the clients that his practice has received, more than 75% came from the world of cycling.

Yes, you might say, this interview was taken before his practice became famous. But, don’t you think that it gives extra incentive to business executives for ditching golf in favor of cycling. After all, if a young firm could receive so much support from cycling, what about the firm which has decades of experience under its belt?

Third Business deal in history was done on a bike

People who have seen the movie “The Internship” might remember its heroine Jules’ cycling in her office while learning about her appointments from her secretary. You might have rebuffed this scene as fantasy but it is a fact that a company in Chicago has designed an office containing custom bike racks, indoor track and more.

Apart from heading giant companies, both the CEOs had one other thing in common: cycling. More importantly, when the two CEOs were discussing how to wire $130b, both of them were sitting on their respective bikes.

Put simply, both the CEOs were sitting on an upright bike while discussing the third biggest deal in the history of mankind.

Firstly, it is the obvious advantage that cycling is more demanding than golf. Put simply, you burn more calories by pedaling your cycle than simply moving from one place to another in your golf cart.

Since the hours in today’s business are brutal – with the concept of retirement also retiring, business executives know that they have to be on their toes – both physically and mentally, to continue progressing till their late age.

However, while they want to remain fit, they cannot take an hour or two out of their daily routines to hit the gym - whether it is in their office’s basement or on the next street. It is where cycling comes into play.

Secondly, as the CEO of community cycling group Bicycle Network Victoria told Business Insider, young entrepreneurs are more inclined towards cycling because, in his words, “it’s hard to fake it when you’re on a bike” rha when you are using the best rangefinder.

Since you are sweating profusely – and have to keep your balance in check while talking to other people, your mind lets go of the “play-safe” area which golf provides it. As a result, an honest rapport is built with no hidden factors.

Another reason of going being overtaken by cycling is the time required to indulge in both sports. For example, if you have to play a golf game, you are bound to spend hours on a golf course. In contrast, a great bike ride requires only one to two hours daily.

Hence, in today’s world where time is the most important entity, cycling attracts business executives more than golf. 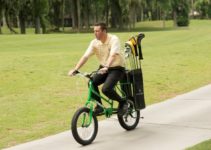