In addition to the regular, pedal bikes, the balance bikes can also be a useful accessory in terms of teaching a child of how to ride a bicycle. When some parents opt for the former version of bikes to teach their kids, there are others who prefer the latter as a much viable training tool before moving on to the much-advanced pedal bikes

If you want your child to learn to ride using the balance bike, you’ve just come to the right place. The below-mentioned guide has got some useful tips for parents who want their child to ride using a balance bike. It will also help them to make a smooth transition for the balance of the pedal bike for their own convenience. So all in all, it has all the tricks which a parent might want to learn before teaching their child of how to ride with the help of balance bike.

Step 1: Let the child Stride with the Balance Bike

Allow the child to walk while sitting on the balance bike. Allow them to move the vehicle without any external assistance. It will help the child to realize that if they lift up their feet, the bike will travel a considerable distance. In the meantime, the parents should accompany their children by walking with them throughout their journey.

After some child, the child will start gliding with the help of this vehicle. His ride will become faster as the parents start to struggle while keeping up with the speed of this vehicle. This is the time when you should start thinking of making a switch to a bike with Pedals.

Purchase a pedal bike which has effect braking mechanism for both front and back tires. Take out the pedals and make it similar to the kids’ previous balance bike. Afterward, take your child, his new bike without pedals and the original balance bike to the nearby park. Find an inclined grassy surface. Ask the child to ride his balance bike on that terrain. Once the child starts riding, you’ll realize that he or she has absolutely no trouble while riding on the slope thanks to their previous experience with the similar bike.

Then replace the balance bike with the one without pedals. Tell them to ride it in a similar manner as that of their previous bike and they’ll do that in a pretty flawless manner.

Put on the pedals onto the new bike but tell your child that he/she shouldn’t be using it anytime sooner. Ask them to ride in a similar manner as that of the balance bike with the only exception that this time instead of lifting their feet in the air, they have to place them on the pedals. Have them to glide on the slope which will give them a unique experience of riding on the pedal bike.

Step 4: Use the Pedals

After repeating the above-said process for a few times, children will start to enjoy it. They will realize that after riding a balance bike, it isn’t too difficult to ride a balance bike. However, children shouldn’t stop practicing it other they can forget this trait sooner, rather than later.

It’s up to the parents to keep on encouraging their child that if he is doing something valuable for them. Even if the child does fall down, as it will happen eventually, treat them with a calm attitude. Help them to learn from their mistakes and make praise when the child is doing something in the right manner.

Another way of encouraging your child is by taking a picture. So all in all, parents have to be patient while teaching their child about almost everything in life.

The most important thing about the use of balance bikes is their ease of use. Kids don't have to understand a lot as they can just ride this bicycle without extra knowledge. The balance bike also reduces the chances of falling as due to the lack of speed, chances are grim that a child can sustain unwanted injuries. Once he or she starts feeling confident, move on to the pedal bikes with the help of tips which are already mentioned in the aforesaid guide. You will realize that it involves no rocket science of helping your child of how to ride a balance bike in a flawless manner. 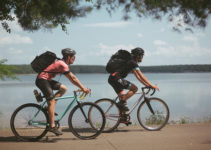